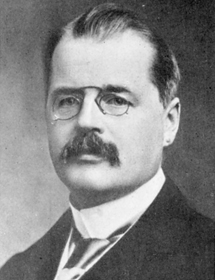 C.C. James was hired as professor of chemistry in 1886, immediately after he graduated. In 1907, he created the Agricultural Representative Service to deliver scientific information to Ontario farms and teach agriculture in high schools.

“… there is that curious streak in us which makes a basket of scabby peaches loom as large as a carload of faulty rails, and a dozen small apples in the middle of the barrel rank with the flaw in a forty foot bridge.” – C.C. James

During his tenure as Deputy Minister of Agriculture, from 1891 to 1916, C.C. James worked to encourage improved farming methods among Ontario farmers, as he believed the wealth and prosperity of the entire country would be elevated.

James believed that the “improving farmer” was the “greatest undeveloped resource in Canada”, and that an indifferent public, including urban consumers of agricultural products, was also to blame for the slow progress of scientific agriculture. To remedy this, he spoke to Farmers’ Institutes, Boards of Trade, Merchants’ and Bankers’ Associations, to promote public funding for agricultural education. He supported the Women’s Institutes, which he believed improved the social life of the countryside and made farm life more attractive to young people.

He directed the first specialists in agriculture and district representatives of the Department of Agriculture, commonly known as "ag reps", to visit farms and offer modern solutions to local problems. Their other original task – teaching agriculture in high schools – was soon abandoned. Even though ag reps were initially rejected by many farmers, James persisted in his optimism that their initiatives would help rejuvenate the countryside. By 1914, when he retired, short courses, Junior Farmer Clubs and school fairs were popular activities, all organized and administered by county ag reps. By the 1920s, ag reps were in place in all counties and districts and are still a cornerstone of extension education throughout rural Ontario.