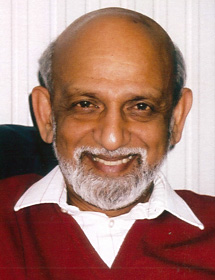 Jana Janakiram is a capacity development professor emeritus at the Ontario Agricultural College, University of Guelph and has travelled the globe to make agriculture education more accessible in developing countries. Jana continues to support projects and graduate students in the School of Environmental Design and Rural Development. He is currently writing a book about his experiences to demonstrate that meaningful work can also be fun.

“Working in capacity development and focusing on international projects has enriched my experience of different cultures, values and communication styles. Sharing these skills and learning from our students, faculty and colleagues at OAC has been a privilege and a pleasure which I cherish even after retirement.” – Jana Janakiram

Between his plant science studies and his first projects in plant breeding, Jana’s early career led him across the southern hemisphere. After completing his degrees in India and Australia, Jana became principal scientist at the International Institute of Tropical Agriculture in Ibadan, Nigeria.

Family and an interest in the University of Guelph led him to the department of Rural Extension Studies in 1991. Inspired by the university’s distance education department, Jana, in collaboration with faculty, began projects that would overcome the limited capacity of the universities in developing countries he had encountered. This concept took him to Cameroon in 1991, where he helped the University of Dschang develop a diploma in agriculture through distance education. Jana then took this idea to Egypt, India and Russia over the course of 1995 to 2013. Aware that learning doesn’t just happen through books, Jana later developed a project that brought seed technology to illiterate farmers through voicemails on their mobile phones.

After the 2006 tsunami devastated parts of Sri Lanka, Jana and a team of researchers from universities across Canada designed a project his homeland to help with sustainable reconstruction. The project put emphasis on empowering Sri Lankan citizens and universities to lead the work, something Jana believes is crucial to development projects. Jana’s Sri Lankan work extended past his retirement in 2006 and into his time as professor emeritus, which he was appointed to in 2011.