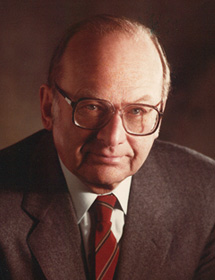 Francis Redelmeier immigrated to Canada with his parents and brothers in March 1939. He had no farming experience, but he became an expert in milk marketing and a Master Breeder, using the herd name “Don Head Jerseys”. He was a modest and generous man who supported many cultural, health and environmental organizations.

“Fundamental to our position is the principle that producers should receive compensation for their milk according to the value that processors extract from it. Multiple component pricing is vital to the health and stability of Ontario’s dairy industry.” – Francis Redelmeier

Redelmeier was actively involved in the Ontario Channel Islands Milk Producers’ Association (OCIMPA). He was also a member of the Ontario Milk Marketing Board (OMMB), created in 1965 by passage of the Milk Act. In 1969, Channel Islands breeders (Jersey and Guernsey) applied to market their high-butterfat milk outside the jurisdiction of the OMMB. They believed it deserved a premium price, but the Supreme Court of Canada denied the application. Through his work with both organizations, Redelmeier concluded that multiple component pricing, based on butterfat, protein and milk solids, could be equally advantageous to all milk producers. In 1985, as president, he represented the OCIMPA in negotiations for multiple component pricing, which became effective in Ontario in 1992, and later in other provinces.

Redelmeier was supportive of his wife's interest in local history. In 2013, this appreciation for rural history led their family to endow the University of Guelph with the Francis and Ruth Redelmeier Professorship in Rural History. The files of Don Head Farms, held in the McLaughlin Library, complete the gift.