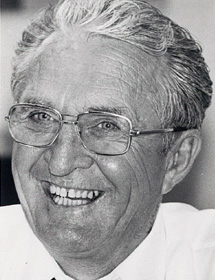 George Jones grew up on a mixed farm outside Charlottetown. His mother recognized his academic potential and worked with him at night to get him into teachers college. He served in World War II as an Air Force navigator. Following the war, he attended OAC and settled permanently in southern Ontario.

“It's better to wear out than rust out so get to work! What are you saving yourself for?" – George Jones

George Jones (nicknamed “Corn” Jones) was a member of the cohort of returning soldiers who entered OAC when World War II ended. Like Jones, many of these veterans studied the new sciences of crop physiology, plant pathology and breeding, and applied them to the management of soils, diseases and weeds. He promoted hybrid corn and soybeans, two crops which were relatively new to southern and southwestern Ontario, as complementary rotation partners. These two crops, with winter wheat, slowly replaced mixed farming in many regions of the province.

After the completion of his Master’s of Science in 1952 he took a faculty position in the Department of Field Husbandry, later the Department of Crop Science; a position he held until his retirement in 1988. Although he was a trained scientist, Jones emphasized the practical benefits of corn to the working farmer. He visited farms and attended meetings to introduce early-maturing corn hybrids. He explained new pesticides, such as Atrazine, and demonstrated their application for control of weeds and insect pests. Within a few years, corn became the dominant feed crop throughout central and eastern Canada. Likewise, soybean acreage and yields per acre increased.

As a result of his optimistic and enthusiastic devotion to agriculture, Ontario feed crop producers supplied the livestock industry with home-grown feed, and Ontario’s agricultural industries and rural communities were strengthened. In 1983, Jones received the T.R. Hilliard Award for his outstanding contributions to agricultural extension in Ontario. 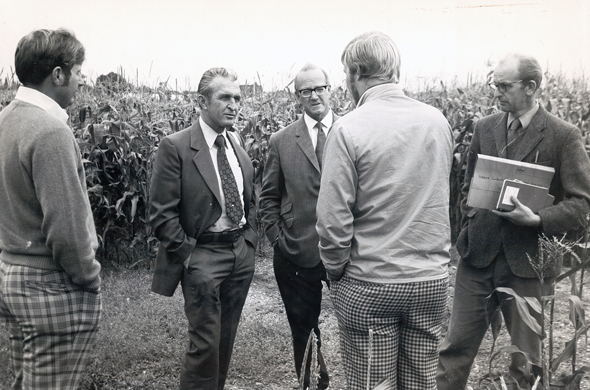 George Jones is second from the left.