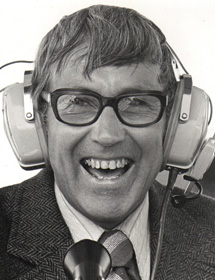 George Atkins was a farmer and farm broadcaster, including 25 years at CBC Radio. In 1975, during a trip to Africa sponsored by the Commonwealth Broadcasters’ Association, he recognized a need for information about simple, low cost practices for small scale farmers. As a result, he founded Developing Countries’ Farm Radio Network, now Farm Radio International.

Atkins understood the power of radio to unite people separated by long distances. In 1978, he visited developing countries to identify ideas of local interest and put together a list of contacts; the study was financed by equipment manufacturer Massey-Ferguson. The company also donated cash and kind to kick-start the preparation of scripts and recorded programs. Materials were distributed free in exchange for feedback; in this way, the network emulated other programs such as the earlier Canadian Farm Radio Forum.

In 1979, Atkins delivered scripts to 34 broadcasters in 16 countries. From this original beginning, his efforts grew into Farm Radio International, which continues to be a non-profit organization today with over 400 radio partners participating in 38 African countries. By compiling practical information about farming, land management, health and other topics, Farm Radio International continues to empower local producers to work through issues of management and production.

Farm Radio International also develops training opportunities and strategies for broadcasting to audiences with diverse ethnic and cultural backgrounds, and facilitates networking among broadcasters.  During the 1980s, the University of Guelph offered administrative support, and collaborated in the establishment of French and Spanish language divisions.

Farm Radio International established the George Atkins Communications Award in 1991 to recognize excellent rural broadcasters who are committed to reducing poverty and increasing food security in their home countries.