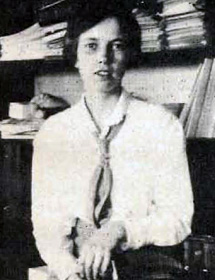 Grace Hamilton was born in the stone house on the south side of College Avenue, on the family farm, where the Arboretum now stands. From 1913 to 1945, she lived in ‘Hillacre’, near the Cutten Club. She attended Macdonald Consolidated School, which now houses the Macdonald Stewart Art Centre.

“… the players put themselves into the story with enthusiasm and zest seldom exhibited by amateurs on their first appearance in public.” – Review of “The Cricket on the Hearth” presented by OAC staff (including Grace Hamilton) and students.

Grace Hamilton Perry was Secretary in the main office of the Apiculture Department, for twenty years, from 1915 through 1935. In the early years of the twentieth century, most young women went to work as secretaries or teachers. They were expected to quit when they married, and especially when they became pregnant. On the other hand, young men could more easily further their education if they chose. It’s not clear if she worked after her marriage.

In 1917, Hamilton played the part of May Fielding in the College production of “A Cricket on the Hearth” by Charles Dickens. She was one of the “College girls” who acted in the play. All proceeds went to the college “Fresh Air Fund”.

While she worked at OAC, the Department of Apiculture was housed in Macdonald Institute and the hives were on the back lawn. Beekeeping in Ontario was closely connected to OAC, and all correspondence of the Ontario Beekeepers’ Association and the Provincial Apiarist crossed her desk. She also handled all paperwork for the department, including memos and examination papers. All this work was done on a manual typewriter, and photocopying machines had not yet been invented!