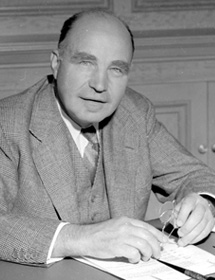 H.R. MacMillan credited his interest in forestry to E.J. Zavitz, whose lectures on farm forestry were part of the OAC curriculum. In 1944, he donated land on Vancouver Island, which became MacMillan Provincial Park and includes a stand of giant Douglas fir trees called Cathedral Grove.

“I thought to myself, if I ever get a chance to come to British Columbia permanently, I’ll do so.” – H.R. MacMillan

MacMillan devoted his career to forest research and development in British Columbia as a public servant and an entrepreneur. After his graduation from OAC, he worked as a summer timber cruiser in 1907 and became aware of the need for sustainable management of BC forests by Canadian companies. He was hired as BC’s first chief forester in 1912 to administer the new Forest Act according to principles of scientific forestry. During World War I, he travelled to Britain to secure contracts for Sitka spruce for manufacturing aircraft.

In 1916, intrigued by his experience in export trading, he quit public service to learn the lumber business. In 1919, he turned down an offer from OAC to head its forestry section, and instead formed H.R. MacMillan Export Company, the province’s first locally-owned lumber export company. In 1951, his company merged with Bloedel, Stewart and Welch Ltd. to become MacMillan & Bloedel Ltd., the largest single integrated forest operating unit in BC. In response to opposition to the merger, MacMillan argued that lumber was a commodity traded in world markets, and only huge corporations were sufficiently capitalized to negotiate deals efficiently. The new company inaugurated an Intensive Forestry Program for long-term planning, including reforestation.

During World War II, MacMillan was timber controller, chairman of the Wartime Requirements Board, and president of Wartime Merchant Shipping Ltd. In 1966, he created the MacMillan Laureate in Agriculture award for outstanding contributions to Canadian agriculture.