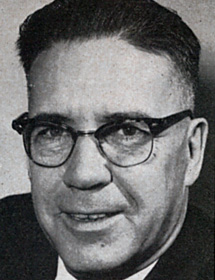 H.H. Hannam financed his education at OAC by teaching school in Grey County near his family’s farm. He was General Secretary of the United Farmers of Ontario (UFO) from 1933 to 1942. From 1943 to the 1960s, he was managing-director and president of the Canadian Federation of Agriculture (CFA), headquartered in Ottawa.

Hannam believed that rural prosperity could be achieved by organization and co-operation among communities of producers. He interpreted co-operation to mean a movement that encompassed social, educational and economic forces for the good of all.

Hannam joined the UFO as education secretary in 1928. In the mid-1930s, producers were still reeling from the disastrous economic conditions of the Depression. Many farmers, especially in Ontario, believed that governments were indifferent to their situation. Hannam initiated a plan to unite all farmers in Canada by strengthening and federating all farm organizations across Canada into one national body, the CFA, to represent them in negotiating fair and stable prices and access to world markets. Co-operation would therefore place control of farm families’ economic lives in their own hands in a process that was orderly and peaceful. He devoted much of his working life to the CFA.

Hannam’s familiarity with discussion groups for brainstorming and problem-solving led him to found the Farm Radio Forum (FRF) in 1941 in collaboration with the Canadian Broadcasting Corporation (CBC) and the Canadian Association for Adult Education. Farmers across the country shared a common concern – depressed economic and social conditions. FRF groups met once a week, in a member’s home, to listen as the program highlighted a topic of particular interest to farmers. Discussion followed, and a leader in each group returned a summary of the group’s comments to CBC, which presented them at the beginning of the next week’s program.

Hannam served numerous other organizations, and was founder of the International Federation of Agricultural Producers.