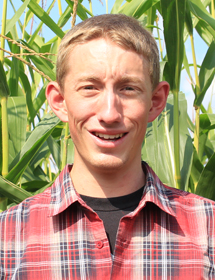 Jacob Nederend has several “Aggie” role models in his family. Both of his parents, as well as his brother, are OAC graduates. The success of his family on their dairy farm influenced Jacob to enroll in the Bachelor of Science in Agriculture program majoring in Crop, Horticultural and Turfgrass Sciences (CHATS).

“I am proud to be a part of a long heritage of agricultural excellence at the OAC. Guelph is a hub of agricultural innovation, and in the last four years it has provided me with the tools to bring those innovations to Canadian farmers.” – Jacob Nederend

As a CHATS student Jacob has had the opportunity to grow his knowledge and interest in crops. So far his favourite course was his third year crop physiology class, which helped him better understand the growth and developments of a variety of crops. The lab portion of the course was the most valuable in his opinion as it provided him with a better understanding of plant research practices.

This past summer Jacob participated in the University of Guelph Weeds Team, which competed in the 2014 Northeastern Collegiate Weed Science Contest. Jacob’s group took home second prize, while the two other U of G groups placed first and third. He has found this opportunity to travel and develop his critical thinking skills incredibly beneficial to his overall understanding of crops.

Jacob is also an active member of the newly established OAC Soil and Crop Club. The club offers a unique opportunity for students to expand their knowledge about current Canadian cropping systems. As the club’s communications director, Jacob is responsible for the creation of newsletters, organization of meetings and planning of events. Jacob is especially proud of his part in facilitating discussion between the club members and guest speakers from industry, such as government representatives and host farmers. Gaining well-rounded knowledge of topics such as weed management and climate change has helped Jacob apply theoretical knowledge to real life issues, but being able to support learning in other students is what Jacob cherishes most.