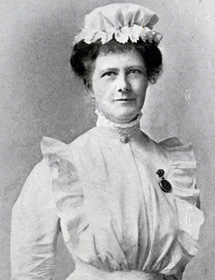 A single woman until age 45, Laura Rose led a life of adventure. She kept house for a homesteading brother in North Dakota, summered in Europe, and graduated from the first OAC Dairy School. In 1904, she drove a Travelling Dairy School by horse and buggy through Cape Breton Island, Nova Scotia.

“I have had babies named after me, ships named the Laura Rose, even calves bear my name, but to my knowledge this is the first [Women's Institute] that has paid me this honour” – Laura Rose in 1949 at the inaugural meeting of a branch near Cambridge, Ontario, named after her.

Rose was instrumental in modernizing dairying in the late 1800s and early 1900s. From 1893 to about 1911, she supervised the Home Dairy Department at OAC, where she became an expert buttermaker, instructor at the winter Short Course, and speaker at farmers’ meetings. Her informative series, “Butter – From the Stable to the Table” was published in Farmer’s Advocate in early 1900. She also wrote Farm Dairying, a text that went through four editions between 1911 and 1916.

Rose was closely involved with the Women’s Institute in its early years. In Ontario, she co-founded the first three branches by 1900, and in British Columbia, she supervised the formation of 15 branches in 1909. When the Ontario Department of Agriculture appointed a Superintendent of Farmers’ and Women’s Institutes in 1904, she was regularly delegated by OAC to lecture at meetings. Despite her own dairying work, she argued that a modern dairy industry was no place for women. She used her platform to advocate for women as housekeepers and homemakers, and she pushed domestic science as appropriate education for girls.

Rose designed the Women’s Institute badge, and suggested its motto, “Home and Country”, as a reflection of her belief that women should strive to be good citizens, good neighbours and good mothers.  Following her marriage, when she moved to Montreal, she and her husband adopted two children.