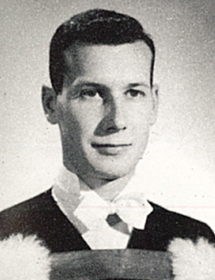 Hometown: Born in Nanking, China and settled in Cooksville, Ontario

Shortly after he was born, Mac Hancock’s family fled to England as the Chinese Revolution began, and after relocating to Canada, they established Woodland Nurseries. He was a World War II pilot who studied at Harvard after OAC. In 2003 he received the Order of Ontario for “conspicuous achievements” in urban planning.

“We were concerned with serving expanding populations …” – Mac Hancock

Hancock combined his love of nature with the growing need for attractive urban housing and services, initiated by the post-World War II Baby Boom, to develop projects around the globe.

Hancock was commissioned to build the first planned community in Ontario, Don Mills, in the North York district of Toronto, using principles of modernism and consistency in material and design learned at Harvard. Don Mills integrated apartment buildings, homes with yards suitable for lawns and gardens, neighbourhood schools, parks and churches with commercial buildings and industries, all surrounding a regional shopping centre. Don Mills became a template for similar residential projects around the world, and in 1997, the Ontario Heritage Foundation designated Don Mills a heritage site.

In 1956, Hancock formed his own company, Project Planning Associates Ltd. He was president for 43 years, and was involved in the planning and construction of Ontario Place, the Canadian Pavilion at Expo 67 and others in many countries. Hancock prepared the University of Guelph Master Development Plan in 1965 with a variety of plants and landscape materials to harmonise the new and old structures on campus, including the Crop Science Building, which opened in 1968.

The Macklin L. Hancock/Project Planning Associates Collection, consisting of over 100 project files, is housed at the University of Guelph Library Archives.