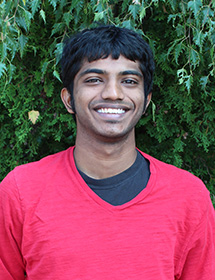 When global food prices skyrocketed in 2008, Noel Mano decided that he wanted to use his love for biology to help people. His interest in food security, plant genetics and molecular biology combine perfectly into his current studies in the Bachelor of Science – Plant Science degree program. After graduation, he plans to pursue a master’s degree, followed by a PhD and then hopefully one day a career in academia.

“Plant science is a part of the [food security] puzzle and the potential benefits of helping people through plants are significant.” – Noel Mano

His interest in food security and plant biology brought him to the University of Guelph due to its reputation as a center for agricultural and biological science excellence and its strong connection to the farming community and nearby ministry offices.

Noel’s appreciation for connecting “the basics” to larger societal and scientific narratives shows in his research interests and his involvement on campus. When not in class Noel is busy on campus as an active member of the U of G Debate Society and a volunteer for the campus radio station CFRU 93.3 FM. Noel and three other students co-host a weekly News Hour program where they select local news stories and then relate them to a discussion on broader issues.

Noel sees genetic engineering, although controversial, as an obvious example of plant science tackling a piece of the complex issue of food insecurity. By using genetics from other organisms with traits such as nitrogen production and water use efficiency plant scientists can enhance how a plant uses resources and, for example, be bred to maximize the use of land that wasn’t traditionally productive for growing food.