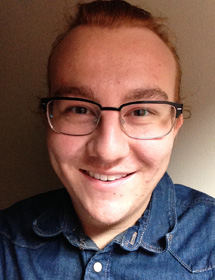 Robert Lukacs is a tennis enthusiast who enjoys spending time in the great outdoors. After some meticulous decision making, Rob decided the environmental science community at the University of Guelph fit his interest perfectly. After two school years in the Bachelor of Bio Resource Management (B.B.R.M) in Environmental Management, Robert has uncovered his passion for working with nature.

“Since I was young, spending my time outdoors was one of my favourite pass times. Ever since I began the B.B.R.M. environmental management program, a variety of courses have given me the ability to discover exactly what I’m passionate about. This passion is nature.” – Robert Lukacs

Rob has enjoyed the hands on component of his program. Working in nature identifying tree species and discovering organisms living within a body of water are among some of Rob’s favourite course activities. A conservation field course within Rob’s program uncovered his interest in aquatic environments. The students visited the Niagara Escarpment for one week, travelling to different small bodies of water to learn about each ecosystem and the different species that live within it. Rob was always the most eager to dive in and make new discoveries.

The career opportunities that Rob has taken into consideration include: park ranger to monitor and supervise ecosystems, or conservationist at a national or provincial park. Rob has also considered pursing a master’s degree focusing on aquatic science. This far into his environmental career, Robert has gained volunteer experience at the Arboretum and spends time working with Friends of Fort Erie testing water samples in lakes and creeks.

This will be Robert’s first year on the Guelph campus after spending his first two years of study at the Ridgetown Campus. He hopes to become a member of the student government and has interest in starting a campus tennis club. Robert’s experience as a student ambassador and peer helper at Ridgetown Campus will be a great leadership foundation to build on in Guelph for the remainder of his degree.