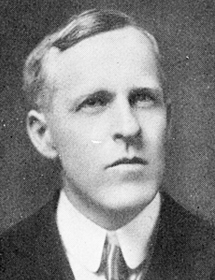 By all accounts, William Blackwood was a man of many talents. He coached championship OAC soccer teams, hence his nickname “Soccer Bill”. He sang in a group called the “Engineer’s Octette” and was a talented outdoor sportsman. Oh, and a popular teacher who was honoured by students who named him Honorary Class President five times throughout his tenure.

“Let me be known as a man and friend of the students, not as a scientist.” – William Blackwood

Blackwood’s first career was teaching in rural Ontario. He attended University of Toronto, and alternated course work in physics with occasional lecturing to pay his tuition. He was a “teaching engineer” who led the Ontario Agricultural College’s Physics Department through times of transition.

Blackwood’s years at OAC coincided with the growing acceptance of the gasoline tractor as a machine, which complemented, but did not yet replace, the horse. His knowledge of machinery on the farm coupled with his personality and skill as an instructor, attracted many regular and short course students.

In 1921, OAC created the Department of Farm Mechanics; Blackwood was responsible for teaching the operation and maintenance of electrical machinery and equipment, farm power, sewage disposal, pumps and hydraulic rams, cold storage and ventilation, and other topics as they arose. In 1928, he became head of Agricultural Engineering in the Department of Physics.

His focus on engineering as applied science was extended to the community through extension work. His analysis of the relative benefits of gas-electric generation and hydro-electricity, introduced in 1920, benefited many farm families. He introduced studies and demonstrations of explosives for clearing land of stumps and rocks, and electric fencing. Blackwood Hall, named for him, on campus is the former home of Agricultural Engineering.