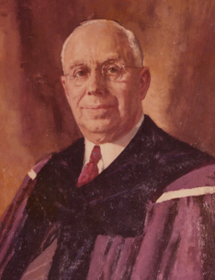 William Reek is a widely recognized figure in Canadian agriculture. He served as the Assistant Livestock Commissioner for Canada, the Ontario Deputy Minister of Agriculture in 1937, and the superintendent of the Western Ontario Experimental Farm in Ridgetown, Ontario for 15 years before being named president of OAC in 1947.

“Few men of national stature have the fortune to remain as well-known and universally respected in the area of their birthplace. He provided technological leadership along with mental uplift and visions of new horizons.” – A Kent County farmer

After graduating from OAC, Reek found his way back to campus in 1913 as a professor of Animal Husbandry. Reek was later appointed as the superintendent of the Western Ontario Agricultural School and Experimental Farm in Ridgetown and used his leadership role as an opportunity to inaugurate the Ridgetown College of Agriculture and Technology in 1968, now Ridgetown Campus. While in Ridgetown, Reek also encouraged the expansion of grain corn, which led to Kent County’s future leadership in Ontario corn production.

As OAC president, Reek managed to recover from several difficulties arising after the Second World War. One of the most pressing problems was a surplus of new students without enough residence space to house them. As a solution Reek had the available residence facilities modified and even had an onsite campground installed to accommodate willing students.

During his presidency Reek pushed to improve the quality of OAC faculty members as a result of the public idea that Guelph should become a university and was seen as falling behind. Reek’s decision to upgrade faculty credentials saw OAC’s undergraduate studies become equal to those offered at other universities and its graduate studies expand. Reek guided the college through a time of public scrutiny and created a solid platform for the Federated Colleges.