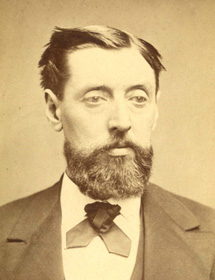 Henry McCandless spent most of his years of education in the North of Ireland attending Dublin University before travelling to North America to become a lecturer on the subject of agriculture at Cornell University. McCandless ventured to Ontario, to fill the role of the first principal of the Ontario School of Agriculture in 1874.

“Canadian agriculture is now in a transition state; it is gradually, but steadily, assuming the character of real husbandry and to aid in this transition is the mission that its agricultural literature has to perform.” – Henry McCandless

The Ontario School of Agriculture, now the Ontario Agricultural College, was the first of its kind in Canada, and Henry McCandless had little knowledge of Ontario terrain or agriculture when obtaining the position of the school’s first principal. McCandless was described as a peculiar man with a controlling personality who took on a delicate position responsible for establishing this unique school. The task of integrating experienced and sometimes stubborn mature male staff with young and free spirited students proved to be a very difficult for McCandless.

The campus fell into chaos under the reign of McCandless. His administrative skills lacked, he quarrelled with the rector, and he fell victim to manipulation by the students.  As an example, students demanded frequent and bountiful meals during facility working hours due to the “extreme” conditions of southwestern Ontario. His submission to this request weighed heavy on budgeting and did not help with the scrutinized public opinion of the school as disorganized and unnecessary.

McCandless was unable to control the disorder of the school and after three struggling months he was forced to resign by the government. The first impression of the school was tarnished, laying an unstable foundation for his young successor William Johnston.