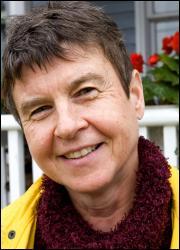 Helen Hoy has published Modern English-Canadian Prose (Gale, 1983), co-edited with Thomas King and Cheryl Calver The Native in Literature (ECW, 1987), and published articles on Canadian fiction, Hugh MacLennan, Gabrielle Roy, Robertson Davies, Henry James, Alice Munro, Suzette Mayr, and Lucy Maud Montgomery. She has taught at the Universities of Toronto, Manitoba, Lethbridge, Minnesota, and Guelph. She has been Chair of the Department of English at the University of Lethbridge, Associate Editor on the editorial board of Signs: Journal of Women in Culture & Society, Graduate Secretary for the Centre for Advanced Feminist Studies at the University of Minnesota, and Coordinator of Women’s Studies at the University of Guelph. Helen Hoy’s latest book, How Should I Read These? Native Women Writers in Canada (University of Toronto Press, 2001), examines the problematics of reading and teaching First Nations writing from the perspective of a cultural outsider. It raises and addresses questions around “difference” in relation to texts by contemporary Native women prose writers in Canada and includes chapters on Maria Campbell, Jeannette Armstrong, Ruby Slipperjack, Beatrice Culleton Mosionier, Beverly Hungry Wolf, Lee Maracle, and Eden Robinson. How Should I Read These? combines theoretical and textual analysis with personal and pedagogical narratives to address basic issues of reader location, cultural difference, and cultural appropriation. It concludes that these authors have refused to be confined by identity categories such as “woman” or “Native” and have themselves, provided a critical voice guiding how their texts might be read and taught. She received an American Council of Learned Societies Fellowship for this research.

Helen Hoy’s teaching and research focuses on 20th and 21st-century Canadian literature, particularly fiction, on marginalized writers and issues, including race, ethnicity, gender, sexual orientation, and disability. She is interested in critical race theory, feminist theory, gay-lesbian and queer theory, postcolonial and First Nations theory, and disability theory. Recent courses have included “Transgressive Sexualities”, “Fetal-Alcohol Narratives”, “Literary Borderlands”, and “Native Literatures and Critical Cross-Readings”.
Her focus more recently is twofold. One direction involves an interdisciplinary approach to fetal-alcohol narratives, particularly in a First-Nations perspective. She is examining the light that a clinical knowledge of Fetal Alcohol Spectrum Disorder (FASD) can shed on familiar novels. At the same time, she is also using contemporary fiction and non-fiction texts and the resources of Disability Studies to place FASD in a larger, often colonial perspective and to challenge approaches to impairment that overlook society’s construction of disability. (She also provides educational workshops and advocacy around FASD in the community.) The other direction involves queer theory and literature, with special attention to English-Canadian lesbian fiction, criticism, and theorizing. She is continuing to keep in play her attention to race, ethnicity, nation, to difference and identity here, while bringing investigations of the representation of sexuality and desire to the foreground. The politics of representation and self-representation, of oppositional writing and transgression, of reception, and of pedagogy are all part of this undertaking. She is looking at various strategies for writing difference and writing across difference, with emphasis on how race inflects sexuality and sexuality inflects race. She is using selected examples to explore the theoretical problematics raised by the conjunction of postmodern/queer destabilizing of identity on the one hand and postcolonial/feminist/lesbian-gay political engagement on the other (a false binary that the texts themselves contribute to undoing).

“The Portrayal of Women in Recent English-Canadian Literature”

B. A., English Language and Literature