Acquiring knowledge is a lifelong process. Some may find that daunting, but others find it empowering. Brad Howie, an Anishinaabe master of environmental sciences student, falls into the latter category. He is a student at his core and his approach to learning is inspired by the Indigenous value of interconnectedness.

Brad believes the approach to sharing knowledge should be connected as well. Through research and interpretive signs, he has brought Anishinaabe teachings to the University of Guelph’s Arboretum.

He worked with Indigenous Elders and Knowledge Holders, as well as his advisors Drs. Jesse Popp and Andrew Young, to create a series of signs, titled Mtigwaaki (“to be among the trees”).

Dr. Popp is the Chair in Indigenous Environmental Science and a member of the Wiikwemkoong Unceded Territory. Her research and teaching weaves Indigenous and Western ways of knowing to contribute to the advancement of environmental and ecological science. She is supporting many Indigenous initiatives for the Arboretum and knew this project would align well with Brad’s passion for science communication and education. 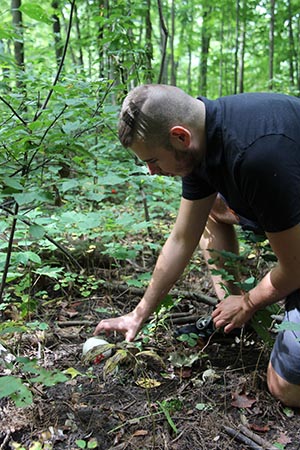 “There is so much Indigenous knowledge, culture and heritage connected to the land, and a lot of it has sadly been lost,” says Brad. “The Arboretum wanted to weave Anishinaabe teachings into their programming but weren’t sure how to approach it. A crucial part of having successful educational programs that include Indigenous teachings is to involve Indigenous individuals and community.”

It was important to him that this project was authentic, appropriate and respectful. He hopes visitors will learn from the land and feel a strong connection to the forest, which is encouraged by the thought-provoking questions found on the signs.

“Anishinaabe culture lives through language and storytelling. I tried to develop a story that would inspire people to look at the land differently.”

Although his goal is to teach others, Brad has learned just as much along the way. His family was affected by the Sixties Scoop, which was the forced removal of Indigenous children from their family and communities. This project has given him the opportunity to immerse himself into his culture.

“My mother didn’t grow up with her culture and neither did I. While developing the signs, I felt like a fraud because I have been so removed from my culture. My sister reassured me that I’m not appropriating the culture but rather embracing it because I never had the opportunity before. It has been a really enjoyable process getting more connected with my culture.”

His work will support opportunities for other Indigenous students to connect with their culture while exploring the flora and fauna of the Arboretum.

“My work shows respect for the Indigenous culture and students. It shows that their history and knowledge is worthy, and it should be incorporated within universities and today’s world.”

Having felt lost after his undergrad, Brad says his journey has just begun. He is excited to continue this work and further support people’s connection to the land.

“I wasn’t sure what to do with my life, but this project has helped me discover a new path and I’m excited to continue learning. In my experience, science tends to create division, but the beautiful thing about Indigenous science is that it weaves everything together. It shows how everything is connected.”

This article was originally published in the LIBRANNI 2022 / Vol. 4

Interested in learning more? Look for Brad’s signs in the Victoria Woods in the University of Guelph Arboretum.