Many Leave for Change participants blog - often before, during, and after their volunteer assignment - capturing the diversity and richness of their volunteer experience, their reactions to being in a new country, how they navigate and negotiate their mandates, and the impact the whole experience has on them personally and professionally.

You can search blogs by person, country, or year. Enjoy!

I received a very nice compliment today.  As we were wrapping up our lesson for today and I was heading out, my students told me I they didn’t want me to leave Indonesia this week – because they need more time to learn. “You can’t go home!” <grin>.

I was already lucky and very happy because everyone here is so eager to learn and works very hard.  It was amazing to be told that they think they have so much more to learn from me that they want me to stay.  It’s always hard to know, as an instructor, how successful you are in teaching your students.  So this was a very nice way to mark the half way point of my teaching here.

Incidentally, I didn’t say “No”…I told my students they had to call my wife and tell her I wouldn’t be coming home on the weekend <grin>.

I was lucky enough to find a Baskin-Robins yesterday.  I’ve been jonseing for mint-chocolate, however this is a flavour combination which is less than popular here in Indonesia.  It was heaven!

I was chatting with my wife tonight, online, and I started talking about the food I missed and list got longer and longer…so clearly I needed to post about this <grin>.

I am really looking forward to Antipasta; good crusty bread, italian coldcuts – capacolla, calabrese salami, mortadella – olives, grapes, some nice cheese.  This is about a far from Indonesian food as you can get <grin>.  I know antipasta is normally served with melon…but I’m not a fan…Jen can have all the melon; she can’t get enough of the stuff.

I have to admit I am missing my Tim’s.  It’ll be great to order a good ole Large Double-Double.  Coffee here can be great…but it also is often instant.  I’ve found it’s better to stick to tea, which is always fantastic.  Especially Es Tea Tawar – plain iced tea.  Just tea, over ice – or if you’re lucky chilled tea.  Fantastic.  You have to be clear and say tawar…otherwise you’ll get Es Teh Manis, which is almost the national drink here.  It too is tea over ice, but its also powerfully sweet with a generous helping of palm sugar mixed in.

Another guilty pleasure I’m longing for is a Bic Mac and fries.  They have McDonalds here…and I haven’t tried it.  But I’ve already been told it’s different. It’s on the list to take the Pepsi challenge with the local McD’s before I return home.

I am also longing for Angels.  It’s a local diner I frequently haunt.  Good food, big portions and reasonable prices.  It’s also one of the few places in the area you can get a decent Montreal smoked meat sandwich.  To be fair, I’m not sure if its the food I miss or the company – since I almost always go with friends and family <smile>.

Anyways, we’re in the home stretch now.  Just a few days before I leave Malang and head to Jakarta to catch my flight back to Canada via Hong Kong.  This is the trip of a life time and my work has also been really great.  Still, I miss my family and as amazing as the food has been here, it will be nice to return to some old favourites as well.

My first week at Agapé was great. After working out some communication issues – my Indonesia isn’t good enough to teach in and my English is very fast – we had a great week.

I taught IT Training Strategies, PC Security, PC Troubleshooting, Web Fundamentals and HTML. This week we will be covering CSS and WordPress, both as a blogging tool and as a Content Management System.

I had a nice, quiet weekend. My family offered to take me on a day trip to Bromo, a nearby mountain, but I took a pass. Instead I rested, checked out some PS2 games I picked up and worked on the new website for the ASF. I think it’s coming along really well and it should be done before I leave.

I have two other projects I’m working on as well. I’d like to install AVG Free Anti-Virus, Deep Freeze and Anti-Executable on the lab machines here. They often have problems with their computers and I think this combination will do a good job of locking the lab down. The second project is I’m trying to get high-speed Internet installed here at the ASF. Currently they have no internet at all. It’s been a challenge navigating my way so far, but last night I got the number of a direct sales rep for a major ISP so I’ll call today and hopefully get the ball rolling.

Hope your all set to have a great week too!

On the weekend of April 11th I arrived in Malang, where I am now.  Originally the plan had been to land in Jakarta and then travel by bus and train to Malang, while visiting Indonesia along the way: Bandung, Pekalongan, Borobodur, Surabaya and then Malang.

However, because of the election – which is a national holiday – everything was all booked up.  So, instead we flew straight to Malang right after the election.  After a lovely day of rest, we packed up and headed off to Pekalongan, the city where my father was born and raised.  It was a long 12 hour drive to Pekalongan, but it was a fantastic way to see Indonesia.  After Pekalongan we visited Borobodur, Prambanan and Jogjakarta before heading home.

The reason I wanted to travel by bus and train was to have a chance to really see the country.  Airfare is relatively inexpensive, so we could just hop over the island, but all I’d get to see that way is the inside of airport and planes <grin>.  Taking the road trip was fantastic, because not only did I get to see Indonesia up close, but we stopped at every town to try the local food.

Indonesia is very regional and every region is fiercely proud of its food – it’s fresh produce and the local specialty, often Soto…a type of soup/stew that is eaten over rice.  It is very common to see Soto named after a place, like Soto Pekalongan or Soto Madura.  Also, every town has it’s own snack – seriously – it’s amazing.  It seems like every town has a store advertising Oleh-Oleh Khas Pekalongan, or whatever the city is, which sells and endless variety of snacks which seem to only be available in that one town!  My Aunt Lan called our trip Culinary Tourism <grin>.  It was fantastic.

I had a great time taking photos on this trip.  I love my new camera a lot

.  I’m so happy I managed to get a hold of it before this trip.  This camera makes me look great, even when I’m shooting through a windshield

This is a good example of a quiet Indonesia highway here on Java.  Beautiful, lush and open.  The roads here are quite good – I mean…at least as good at Québecs <grin>. 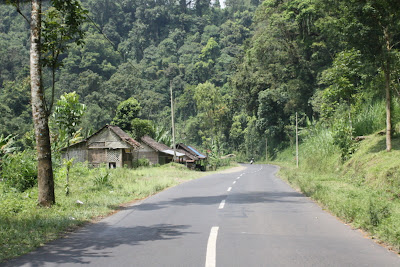 The countryside of Java is filled with farms: rice paddies, corn, sugar cane and more.  I managed to catch a tired farm hand taking a break from the sun and the field on a hot Javanese afternoon. 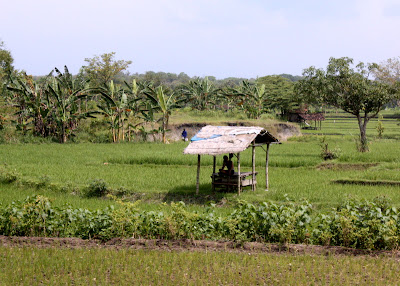 Cities here are a charming mix of old and new.  You can see the history everywhere you go in Indonesia, in the buildings, streets and faces…and you can also see glass buildings, billboards for Blackberries and iPhones and shiny new Toyota Kijangs, a 5-door car built here in Indonesia.

The mix of old and new always seems starkest to me in the streets, because there are motorcycles, WWII era VW jeeps, giant passenger buses with Spiderman painted on the back, bicycles, gleaming black Mercedes, vintage Vespa scooters, rickshaws, carts and sometimes even horses…all jostling for position as they dash madly off in all directions.

Crossing the street is a very special skill here, requiring keen eyes, nerves of steel and a profound faith that you’ll make it to the other side.  Sometimes, you even need to take a bit of break in the middle <grin>. 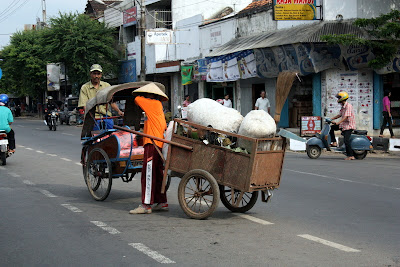 A curious, but common, occurrence is that the front of traffic at stop lights is always motorcycles.  It took me awhile to figure out, but its because there’s always one or two motorcycles at the front, just by sheer numbers.  And then, while the light is red all the other motocycles sneak up and line up waiting for the light to turn green. 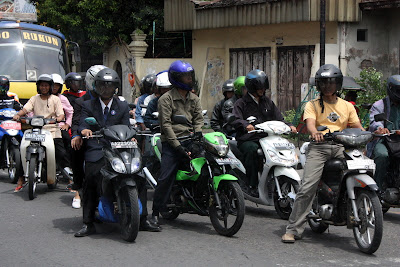 It’s amazing what people fit on a motorcycle here. Especially the number of people.  I have seen a family of five on a motorcycle – but I didn’t quite managed to get a picture of them <grin>.  This is a good example of what I mean; kids often sit in the front.  I really like that his family is all wearing helmets. 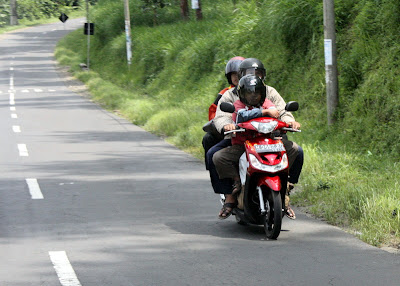 My Uncle has a really nice van that we took on our road trip.  There was lots of room and glorious, glorious air conditioning.   However, what my dad really liked was that we put the seats up in the back and turned it into a bed. 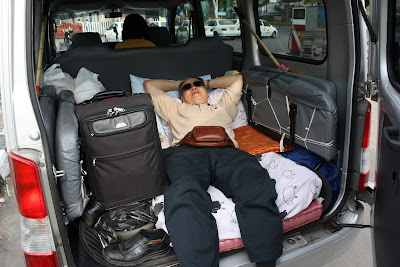